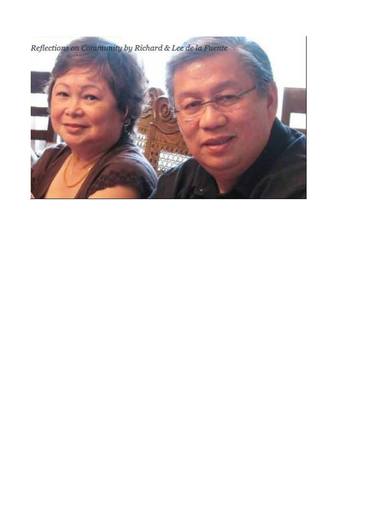 Blessings! We have been members of Bukas-Loob Sa Diyos (Open in Spirit to God) Covenant Community, a private lay association of the faithful, since 1992. It was in this community where we had a life-changing encounter with our Lord Jesus Christ. Since then, we unfailingly find God in its people, its worship, its communion and its mission. Every moment of our life is an encounter with God - His love and mercy. Through these reflections, we hope to share with you how the Lord continues to nurture and to grow us in faith. Come and see! Our God is truly good and worthy to be praised!

(Note: in case you have not noticed, many of the recently-posted reflections on this blog were published in past issues of BLD Newark's Covenant News. In some instances, we made some minor edits to the published articles.)

Blog Archive
Thursday, July 30, 2009
​How It Began For Us - God Made A Way. My sister-in-law, who lived in HK at that time, asked one of the founding couples of the community to invite us to their first Marriage Encounter weekend in NJ. My wife Lee and I were not interested. We had a convenient excuse to decline the invitation- our youngest son who was 4 years old at that time. We did not think we should leave him alone with his siblings for a weekend.

But our "recruiters" were persistent. My sister-in-law kept on calling to encourage us to come. Her husband's brother-in-law who was visiting from Manila likewise made a pitch. Lee was unconvinced. I began opening myself to the idea.

On August 21, 1992, I drove back from my office in West Long Branch to pick up Lee and head to the Marriage Encounter venue. I was late by an hour. Worse, we could not locate the invitation. We did remember that the retreat house was in Maplewood. We drove away not knowing exactly where to go. As can be expected, we found ourselves driving around in circles. And arguing. We neared the end of our patience, but we said we will give it one last try, and if still unsuccessful, we will head for home.

Usually, I loathe to ask people for directions, but this time, I did. Eventually, someone gave us the correct direction, and we did find the place. We were the last couple to arrive. By the time we were ushered to the conference room, the program had already started.

The message of the Marriage Encounter weekend did not penetrate my hardened heart. I was silently criticizing everything that was going on- from the lengthy sessions to the seeming over-sentimentality of the couple sharers to the endless letter writing and dialogues between couples. Lee however relished writing love letters and dialogue. I was extremely uncomfortable. I did not like self-disclosure.

I was quite relieved when Sunday came and with it, the end of the Marriage Encounter. Before we were let go, the three couples who sponsored the Marriage Encounter serenaded us with songs and dances. As I watched them, I noticed the glow of joy and peace on their faces. I initially dismissed it as the "face" they donned for their performance. But as they continued their "harana", I realized I was wrong. Their happiness was genuine. These people were genuine.

Then it struck me that they had something that I did not have. Whatever it is, I told myself that I wanted it.